By Brandon Wallace and Jennifer Cafarella

Key Takeaway: The Islamic State of Iraq and al Sham (ISIS) is reconstituting a capable insurgent force in Iraq and Syria despite efforts to prevent its recovery by the U.S. Anti-ISIS Coalition. The U.S. Department of Defense stated in August 2018 that ISIS retains nearly 30,000 fighters across Iraq and Syria and is “more capable” than Al-Qaeda in Iraq - ISIS’s predecessor - at its peak in 2006 - 2007. ISIS is waging an effective campaign to reestablish durable support zones while raising funds and rebuilding command-and-control over its remnant forces. On its current trajectory, ISIS could regain sufficient strength to mount a renewed insurgency that once again threatens to overmatch local security forces in both Iraq and Syria. The Institute for the Study of War (ISW) is issuing a map update depicting ISIS’s current operating areas based on an analysis of its activity from January 1, 2018 to October 1, 2018. 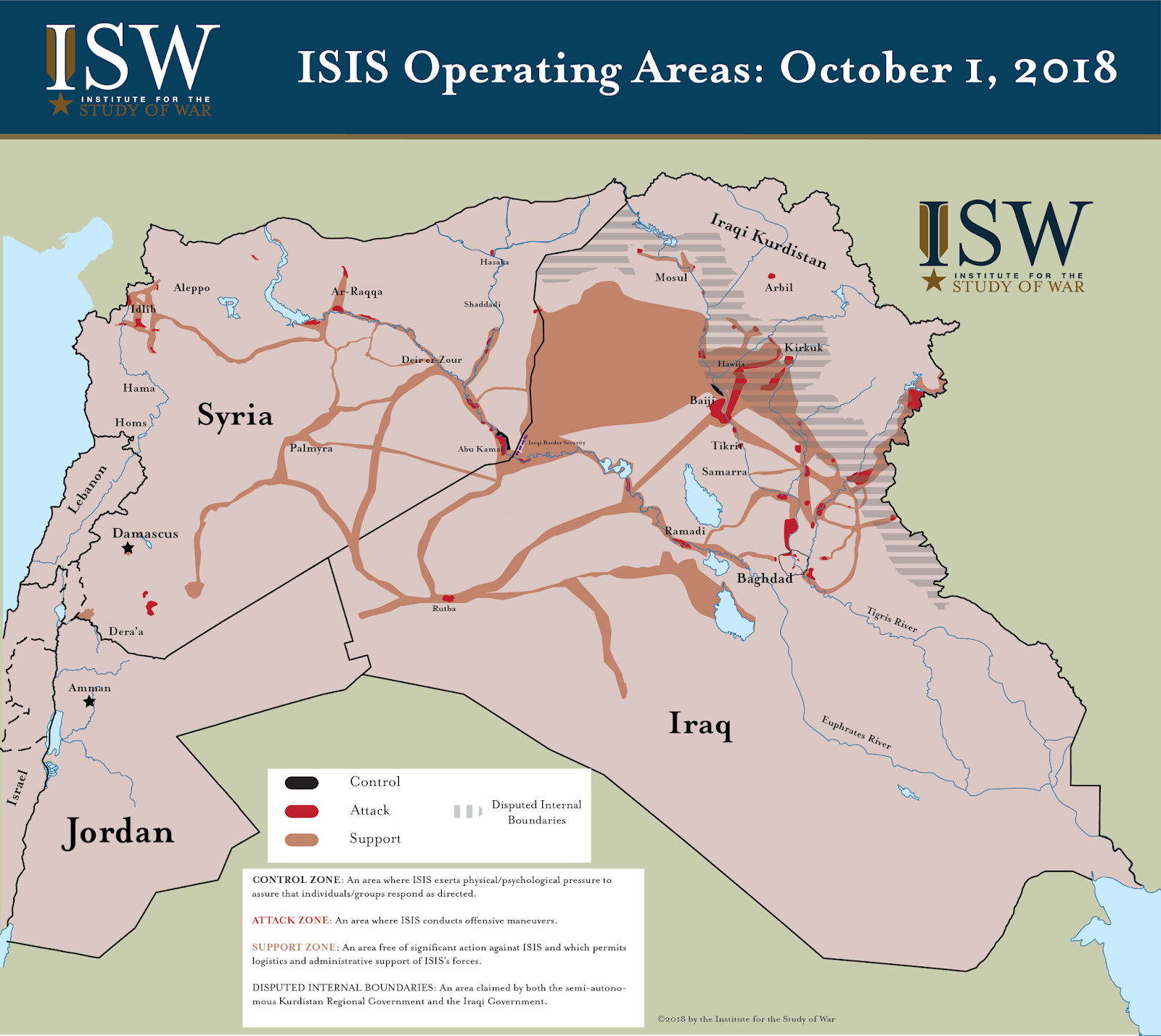 The U.S. Anti-ISIS Campaign has not eliminated the global threat posed by ISIS despite largely accomplishing its stated objectives in Iraq and Syria. The campaign aimed to destroy ISIS’s physical caliphate and “drive down [its] capability” to the point where local forces could maintain security with limited international support. In Iraq, the U.S. Anti-ISIS Coalition accomplished this mission by April 2018 after finishing the last urban clearing operations in Anbar Province in Western Iraq. The Coalition scaled down its operations to a Building Partner Capacity (BPC) effort aimed at enabling Iraqis to “independently manage” a continued insurgency by ISIS. In Syria, the U.S. and its local partner forces are now attacking a final ISIS territorial stronghold near the Syrian-Iraqi border. ISIS has nonetheless already restructured its operations to return to a regional insurgency. The Pentagon stated in August 2018 that ISIS retains nearly 30,000 fighters across Iraq and Syria and is “more capable” than Al-Qaeda in Iraq - ISIS’s predecessor - at its peak in 2006 - 2007. ISIS is now waging an effective campaign to reestablish durable support zones while raising funds and rebuilding command-and-control over its remnant forces. On its current trajectory, ISIS could regain sufficient strength to mount a renewed insurgency that once again threatens to overmatch local security forces in both Iraq and Syria despite support from the Coalition.

ISIS is finding new sources of revenue and rebuilding command-and-control over its scattered remnant forces in order to prepare for a future large-scale insurgency in both Iraq and Syria.

ISIS was able to smuggle as much as $400 million out of Iraq and reinvest it into legitimate businesses across the wider Middle East. It also continues to engage in lucrative criminal activity including extortion, smuggling, theft, and money laundering. ISW has observed multiple additional indicators of efforts by ISIS to generate additional revenue, including:

ISW cannot assess the full scale of revenue being generated through these and other efforts by ISIS. Revenue generation is nonetheless a requirement for any military force to scale up its combat operations.

ISIS can only wage an effective insurgency if it maintains command-and-control over its estimated tens of thousands of remaining fighters. The U.S. Anti-ISIS Campaign has forced some of ISIS’s cells to go to ground and it is unclear how many fighters its senior leaders can directly command. ISIS Emir Abu Bakr al-Baghdadi released an audio message on August 22 calling for his followers to “wage attack after attack” and “unite and organize” against their opponents. ISIS similarly appealed in publications in March - April 2018 for the activation of sleeper cells. These messages suggest that ISIS deliberately embedded operatives to conduct future attacks in recaptured areas across Iraq and Syria. The public orders nonetheless signal that ISIS may lack control mechanisms to issue direct commands to its forces. ISW has observed at least four indicators that ISIS is reconstituting an operational-level command structure in Iraq and Syria as of October 1.

ISIS is waging an effective campaign to reestablish durable support zones across Iraq and deny the rehabilitation of communities liberated by the U.S. Anti-ISIS Campaign. ISIS retains a small control zone where it continues to govern a local population north of Baiji in Northern Iraq.[1] It also retains established support zones in areas south of Kirkuk City including Daquq, Hawija, Riyadh, and Rashad Districts as well as rural areas around Lake Hamrin in the Diyala River Valley. ISIS possesses the ability to move freely across this terrain at night and is actively waging attacks to expand its freedom of movement during the day. Its activities have thus far been limited to small arms attacks, targeted assassinations, and suicide vests (SVESTs). ISIS is steadily scaling up the rate of these attacks, conducting as many as four assassinations per week across Northern and Central Iraq. This violence has expelled civilians from small villages in Diyala and Kirkuk Provinces.[2] ISIS also retains a durable support zone in the Hamrin Mountains, where it appears to base some of its leadership. Iraqi Security Forces (ISF) regularly claim to kill senior militants during clearing operations in the area.[3] In Baghdad, ISIS’s attack pattern indicates that it is likely reconstituting support and logistical networks throughout the Baghdad Belts, replicating its safe havens in 2006 - 2007. ISIS has not yet returned to the systematic use of vehicle-borne IEDs (VBIEDs), which were a hallmark of its resurgence in 2011 - 2013. ISIS may cross this threshold soon. The Iraqi Ministry of Interior claimed to disrupt an ISIS VBIED cell north of Baghdad on September 6.[4]

ISIS has also established a support zone along the Iraqi-Iranian border that it is using to project capability into Iran. ISIS remnants (including Kurdish Salafi-Jihadist group Ansar al-Islam) have maintained a support zone in the Halabja Mountains in Iraqi Kurdistan since late 2016. Ansar al-Islam pledged allegiance to ISIS in 2014 but remained a distinct unit within its command structure. ISIS fighters from Ansar al-Islam conducted the major spectacular attack in Tehran during Ramadan in June 2017. A similar cell later deployed into Iran and clashed with the Iranian Islamic Revolutionary Guard Corps (IRGC) in January 2018. A senior leader of the Patriotic Union of Kurdistan (PUK) Peshmerga stated in February 2018 that Ansar al-Islam is leveraging its cross-border links and local knowledge to facilitate infiltration into Iran.[5] ISIS is expanding its support base in Iraqi Kurdistan beyond the Halabja Mountains. Local Kurdish forces have detained numerous alleged cells in Sulaymaniyah Province in Northern Iraq since January 2018.[6]

ISIS is also reconstituting as an insurgent force across Syria. ISIS has lost all its territorial control in Syria except a twenty-kilometer-long stretch of terrain along the Euphrates River in Eastern Syria near the Syrian-Iraqi border. The area is currently under attack by the U.S. Anti-ISIS Coalition. ISIS is nonetheless reconstituting in areas nominally under the control of Syrian President Bashar al-Assad. ISIS negotiated evacuation deals from Damascus and the Golan Heights to relocate its forces to the Syrian Desert east of Damascus in May - July 2018. ISIS has exploited its underground tunnel networks in order to regroup and launch local counter-attacks in this area against both the Russo-Iranian Coalition and the U.S. Anti-ISIS Coalition. ISIS is also infiltrating Al-Qaeda’s areas of operations in Northern Syria in order to gain access to logistics routes through Turkey. It may also intend to tap into flows of Al-Qaeda-aligned foreign fighters. ISIS has also demonstrated that it retains the ability to mount attacks in areas held by the U.S. Anti-ISIS Coalition and Syrian Democratic Forces (SDF) including Ar-Raqqa City, Hasaka City, and Qamishli. ISIS is likely regenerating support networks across its former territorial holdings in Northern and Eastern Syria.

Future of the Anti-ISIS Campaign

Iraq’s May 2018 Parliamentary Elections and subsequent political developments have further disrupted the ability of the Government of Iraq to prioritize the Anti-ISIS Campaign. A growing protest movement in Southern Iraq divided the government and disrupted clearing operations against ISIS. Iraqi Prime Minister Haider al-Abadi redeployed part of the elite Iraqi Counterterrorism Services (CTS) to secure government installations in Southern Iraq on July 13.[7] The CTS is the preeminent force against ISIS in Iraq and works closely with the U.S. Anti-ISIS Coalition. Abadi similarly redeployed part of the Iraqi Emergency Response Division from the DIBs to Southern Iraq on September 9, further degrading security in Northern Iraq.[8]

The U.S. risks finding its options against ISIS in Iraq further constrained by the outcome of the ongoing government formation process in Baghdad. Iran is making a concerted effort to shape a Government of Iraq that is hostile to the U.S. and could demand a full withdraw of the U.S. Anti-ISIS Coalition. The U.S. is meanwhile using its economic leverage - and threats to revoke bilateral military support - in order to block powerful proxies of Iran from occupying key positions in the Government of Iraq. The outcome of this showdown remains unclear but it could lead to a violent confrontation between rival powerbrokers that would provide new openings for ISIS. The U.S. and its allies must take action to set the political conditions necessary to sustain a long-term campaign against ISIS in Iraq and Syria. ISIS otherwise threatens to return yet again in a form even more dangerous and more capable than its rise to global prominence in 2014.

Institute for the Study of War at 3:37 PM
Share
‹
›
Home
View web version