The Assad Regime Under Stress: Conscription and Protest among Alawite and Minority Populations in Syria

By: Christopher Kozak
After three years of grueling warfare against armed opposition fighters, the Syrian regime faces a dire internal crisis not witnessed since the initial months of the conflict. Defections, desertions, and over 44,000 combat fatalities have reduced the Syrian Arab Army from a pre-war high of 325,000 soldiers to an estimated 150,000 battle-tested yet war-weary troops. Despite reinforcement from tens of thousands of foreign volunteers, Lebanese Hezbollah militants, and pro-government militias, regime forces have proven unable to decisively overcome rebel brigades on the battlefield. These pressures were only exacerbated by the withdrawal of thousands of Iraqi Shi’a militiamen from Syria in June 2014 redeployed to counter the ongoing ISIS offensive in Iraq. At the same time, key demographics within the President Bashar al-Assad’s support base – including the Alawite population – have exhibited growing signs of dissatisfaction with the Syrian regime. Pre-existing grievances related to repression and social inequities have merged with high casualty counts and rising economic stress to fuel a sense of exhaustion among regime supporters. Faced with both a war-weary populace and a burgeoning manpower deficit that threatens its survival, the Syrian regime has resorted to a nation-wide forced conscription campaign – threatening to further split the regime from its base. Charting the contours of this program and its interaction with growing discontent within pro-regime elements of the Syrian population will prove critical for understanding the future state of pro-regime forces and the overall trajectory of the conflict in Syria. 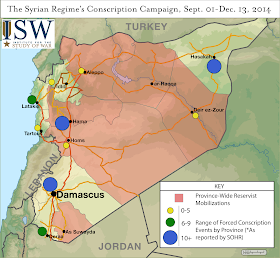 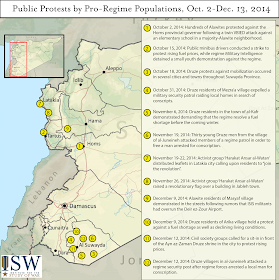 Conclusion
The dueling incentives driving the conscription campaign as well as increased dissent from within pro-regime populations present the Syrian security apparatus with an insoluble paradox. Sustaining combat operations in the context of a war-weary populace is a mission doomed to failure. The regime clearly understands the threat posed by the interplay between these two dynamics and has modified its program accordingly, avoiding mass reservist mobilizations in core support zones and striking deals in areas with a demonstrated resolve to revolt against mandatory service. However, increasing displays of passive and active resistance to the regime provide an early indicator that the Assad regime cannot contain these opposing forces in the long-term. If the United States can successfully exploit the developing gap between the regime and its supporters, it may find the space needed to negotiate a settlement which could witness the exit of President al-Assad – a necessary step towards neutralizing Syria as a haven for ISIS, Jabhat al-Nusra, and other Salafi-jihadist groups which pose a critical threat to the region.
Institute for the Study of War at 3:59 PM
Share
‹
›
Home
View web version